Skip to main content
An exercise in contrasts
Afbeelding

Every university town worth its salt has a thriving pop music scene, and ought to have a concert venue to match. Leiden is no exception, and following a competition to design one on behalf of Leiden City Council, EHA was awarded the commission. The brief was to deliver a distinctive and visually arresting concert hall that had a real pop music atmosphere, was accessible to the general public and complemented the existing urban fabric of the historic neighbourhood.

Music factory
Back in 1969, a venue called the “Kreatief Sentrum” had been established on the Breestraat as a home for the city’s burgeoning pop scene. The foundation that ran it was later succeeded by the Leids Vrijetijds Centrum (LVC), which, over time, outgrew its premises and began looking into the possibilities for relocation. The city of Leiden began buying buildings in a block on the 19th-century ring around the city centre, the gem among these being an old brick factory on the Marktsteeg. Gebr. de Nobel is the culmination of that effort, the new venue taking the name of the owners of a rag and scrap-metal business that once stood on the same spot.

Two new concert halls — one with a capacity for 750 people, one for 200 — are situated at the heart of the block. They are flanked on the Marksteeg by the listed factory building that now serves as the entrance and foyer for both halls. The back-of-house area is on the Lange Scheistraat, and comprises both entirely new sections and parts that were created by converting several old houses on the Lammermarkt. 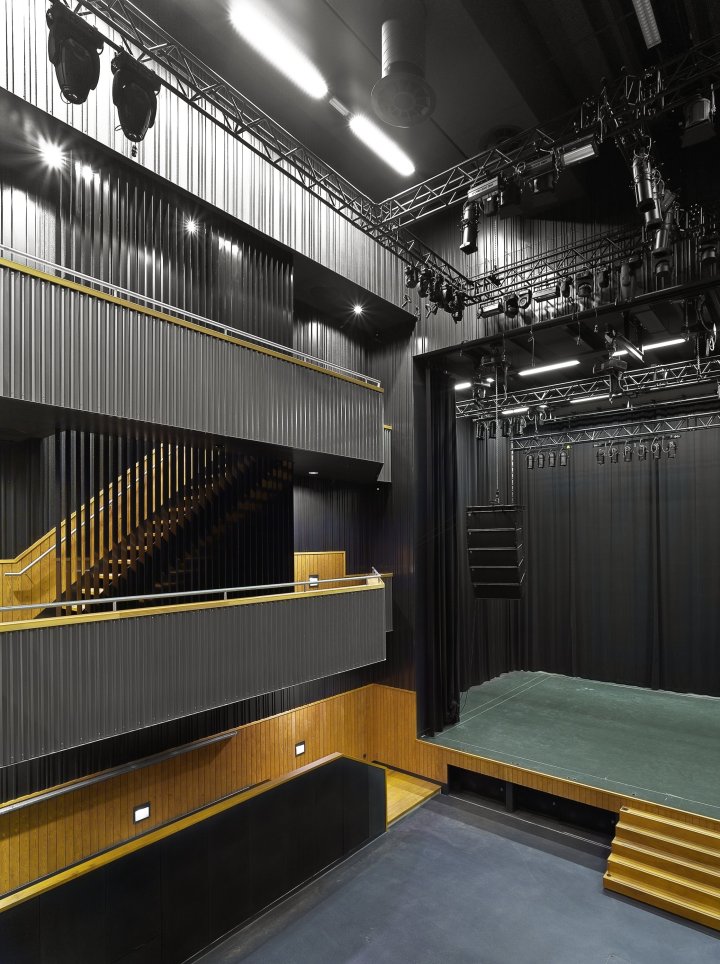 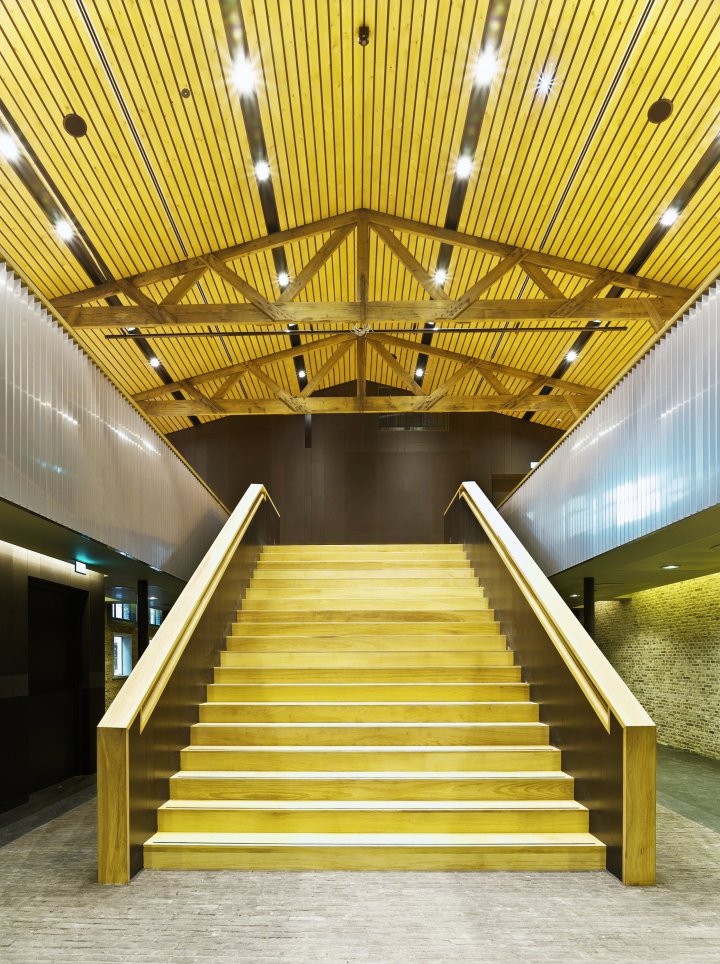 Opposites attract
The theme of both the interior and exterior design is the subtle combination of opposites, such as old versus new, crude versus fine, and so on. The size and scale of the new façades are in keeping with that of the houses that previously stood at this location.

Much of the new structure is wrapped in vertical panels of maintenance-free Corten steel, chosen in part for the way the material’s deep orange colour matches the brickwork of the old factory, and partly for the visual appeal of Corten steel as it weathers. The upper parts of the halls themselves are clad in a contrasting, softly gleaming stainless steel that sometimes reflects the sky and surrounding buildings and other times appears to blend in with the sky and disappear altogether. The same materials — steel, brick, stone and wood — are also employed in the building’s interior.

Energy efficient
The highest sections of the roof are covered entirely with solar panels. Lower sections consist of a green roof, part of the venue’s air purification and heat regulation systems. Lighting is controlled by occupancy detection to minimize energy consumption, and water-free toilets and waterless urinals keep water usage to a minimum. These and other sustainable measures helped the building score 174 points in its Greencalc+ assessment, which is pretty remarkable given the insulation restrictions governing alterations to listed buildings.

On passing through the main entrance into the foyer, your eye is drawn to the exposed brickwork and wooden rafters that define the character of the interior, both of which were preserved from the old factory. You also notice the new elements within the space, made from the same materials but in more refined and polished form. A large wooden staircase ascends from the middle of the foyer, providing access to the floors above but also doubling as a stage for small-scale acoustic performances. 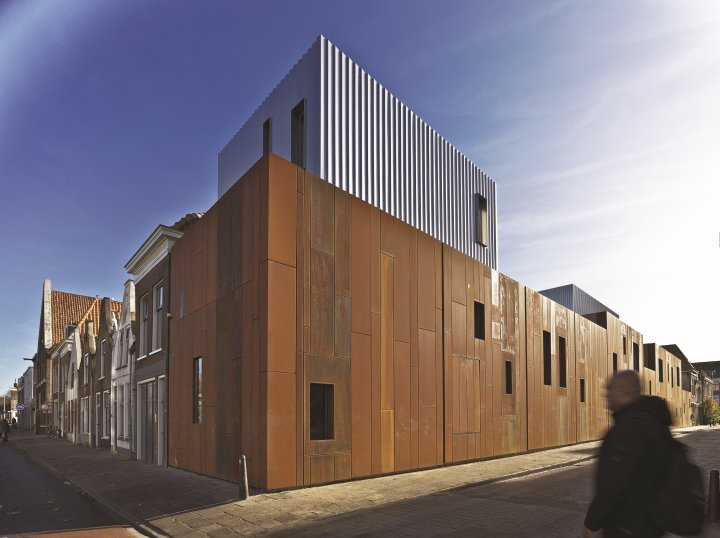 EHA designed one of The Netherlands' most intimate concert halls for us, and one with a real rock atmosphere. Gebr. De Nobel is renowned for its superior accoustics.
Ruud de Visser, director Gebr. de Nobel
Afbeelding 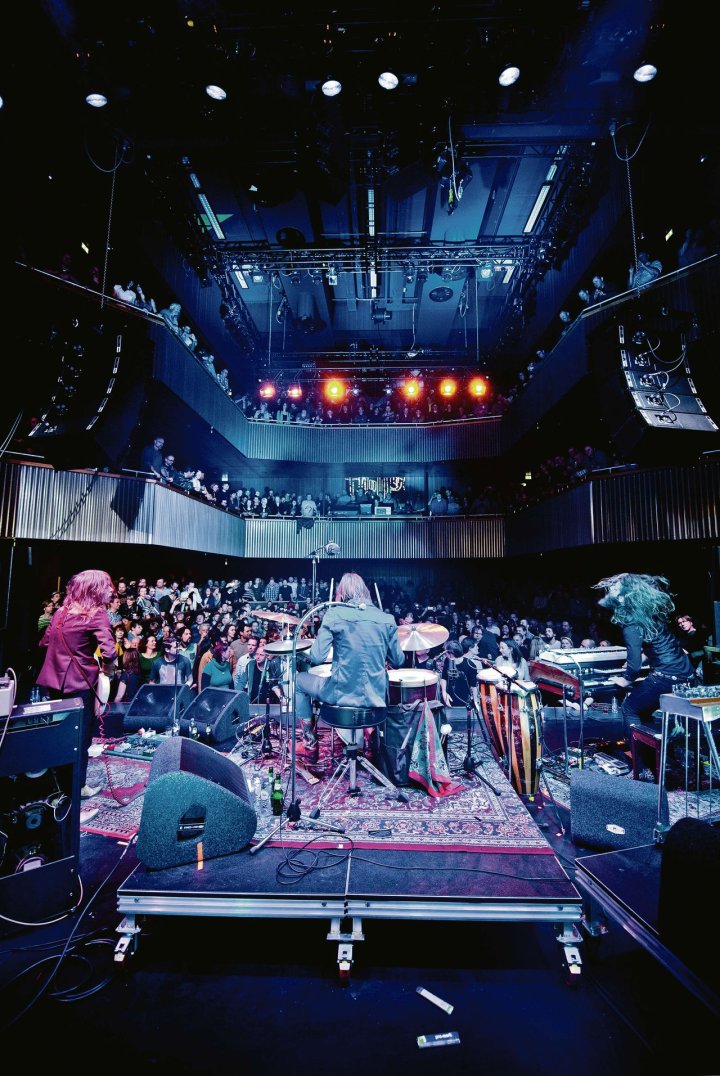 Sound boxed in
The walls of the halls are clad in combinations of steel and wood. The smaller of the two boasts the ambience of a night club, and is used for staging dance acts and performances by emerging bands. The venue as a whole is thoughtfully laid out and acoustically treated to optimize the internal acoustics for the required usage. All loading and unloading occurs inside the building and the halls are located furthest from the surrounding homes. The bigger concert hall is built as a box in a building whereas the smaller hall is built as a box within a box, to keep sound leakage to a minimum, a particularly important consideration for the neighbours, some of whose living rooms and bedrooms are less than twenty metres of the halls.

The highlight of the venue is undoubtedly the main concert hall. Two U-shaped balconies accentuate the height of the ceiling and the theatrical qualities of the space. The design places the audience just feet away from the stage, to provide that feeling of intimacy and involvement craved by bands and music fans alike. This consideration no doubt helped the venue gain its instant reputation among pop connoisseurs as one of the best spaces for live gigs in the Netherlands. The city of Leiden can at last claim with authority to possess a bona fide temple of pop music.